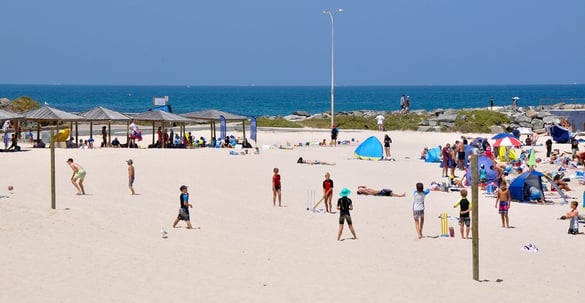 It’s Australia Day 2017, and many of us will be hitting the beach, firing up the barbie and getting ready for a game of backyard cricket.

In the spirit of the public holiday, we thought we’d take a break from our usual Inbound blog and instead do something a little more Australian.

This week we thought we’d celebrate Australia Day by taking a look at some of the campaigns that have become an iconic part of Australian culture and played in important role in our nation’s marketing landscape.

The list is endless, but here are five campaigns we thought have captured the imaginations of Australians over the decades.

In 1954 young songwriter named Alan Weeks stepped into the EMI studios in Sydney and recorded a track for the advertising agency J Walter Thompson. His brief was to write a jingle to promote Kraft’s signature product: Vegemite.

63 years later most Australians can still recite this catchy jingle, ‘We’re happy little Vegemites, as bright as bright can be…’. Even the phrase ‘Happy Little Vegemites’ has entered the Australian vernacular as a way of describing someone who is satisfied with a particular outcome or situation.

Concerned by the number of safety incidents happening on Melbourne’s train network, rail operator Metro Trains reached out to McCann Melbourne to devise a campaign encouraging commuters to take greater care around trains. The result became a global phenomenon.

The animated clip with a catchy tune and outrageous copy depicting the ridiculous deaths of several characters was a sensation, generating at least $50 million worth of global media value in addition to more than 700 media stories.

We Love Our Lamb

"There's nothing worse than being un-Australian – I should know, I've been Australian all my life."

Think Australia Day and we think Sam Kekovich and another fresh ad from Meat and Livestock Australia promoting lamb. Since the first ad aired in 2005, this series has become a staple of Australia Day, capturing our unique Australian-ness in multiple ironic and exaggerated ways.

But more than being a good laugh, the ads are incredibly effective. In 2016 alone it resulted in a 36.9% increase in lamb sales in the lead up to Australia day and generated 5.4 million combined views.

In 1970, Carlton and United Breweries aired an advertisement for VB, its iconic beer. Little did they know they were launching a campaign that would become as iconic as the beer itself.

Depicting the quint-essential Aussie bloke in various hard-yakka situations, the catch phrase ‘A hard earned thirst needs a big cold beer, and the best cold beer is Vic’ popularised the idea of ending a long day with a cold beer.

The ad has had many iterations over the years — but the script and sentiment has followed the same formula. In fact, the original recording of John Meillon's words ‘Matter of fact, I've got it now’ are still being used today, decades after his death.

Legend has it that a young copywriter by the name of Bryce Courtenay was in the back of a taxi on his way to meet the famously quick-tempered Bill Graham — boss of the company that made Mortein — when he scribbled out the concept of Louie the Fly. The meeting must have gone well, because in 1957 Louie the Fly hit Australian TV screens, warning of the threat of disease from flies. Courtenay’s idea was so popular, Louie the Fly is still being used in Mortein commercials today.

How Will Buyer Personas Help My Business?

How to Map Content Your Buyers’ Journey in 5 Steps

A Guide To Understanding Your Buyers To Improve Your Marketing