Earlier this year in October, I found myself standing on a golf course for the very first time. I’ve been talking about learning how to play golf as part of my “semi retirement” plan for a while now, and with no plans to retire or semi retire any time soon, I was learning how to play the sport sooner than expected. Another thing I didn’t expect were the lessons about business, marketing and sales I would learn from golf. I know, it sounds like a weird parallel, but hear me out.

A member of our local BNI group, Terry Johnson, was hosting a charity day to raise awareness and funds for cystic fibrosis. So, a few of us women decided to join the ‘Hit and Giggle’ event (none of us knew how to play, which proved very amusing). It was a wonderful day. We were outdoors in the sunshine, learning something new, networking, having plenty of giggles (and plenty of swings and misses), and I decided from then on that TIMCo was going to support more charity golf days. 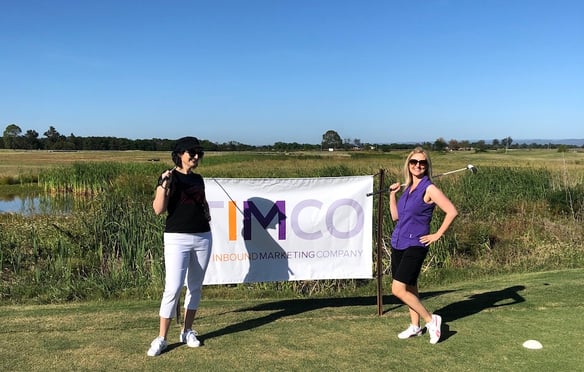 So, when the next opportunity presented itself in November, I couldn’t say yes fast enough. This time around, however, they didn’t mix the “golfers” with the social players - everyone was together. Luckily I was feeling a little more confident as I’d done it before. The event was supported through the Sydney Hills Chamber and Bring a Mate - preventative support for men's mental health. The day was equally as much fun as the one before, but I have to say, I learnt a lot more with a mixed team. Two of us were new to golf and the other two were very good players. We played an “Ambrose”, which meant we were hitting off the best ball.

Perhaps the most interesting part of the day was when it hit me just how similar golf was to business and what I was learning on the golf course could be applied to real-life business situations.

So here they are, my business lessons from playing golf.

Even the weakest team member can add value 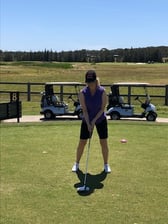 The two strongest team members were of course very good, but their focus when hitting off the tee was to hit the ball the furthest, and most of the time, they did. My focus, on the other hand, was to hit the ball and hit it straight. Interestingly, because I was so focused on what I was capable of doing rather than trying to do what the others were capable of, there were a couple of times my ball actually went the furthest because the other balls ended up lost in the woods or in the water.

Focus on where you are heading 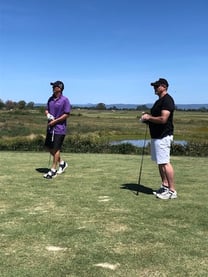 There is so much to remember when learning how to play golf. Bend your knees. Relax. Don’t bend your elbow. Don’t twist. Keep your eye on the ball. With plenty of determination and concentration, I followed all of the rules. I lifted my club and I kept my eye on the ball until the club came down and hit the ball. But I quickly learnt that wasn’t enough. I needed to keep my eye on where the ball was going. Otherwise, I would remain looking at where I was and where I started, and I would have no idea what I achieved or how far the ball went. Looking ahead not only improves your swing but it also shows you what you’ve achieved, how far you got and where you need to start from next time.

You need a strategy to reach your end goal 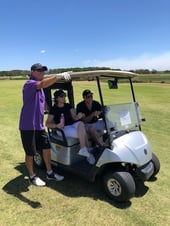 While the objective of golf is to get the ball in the hole, it’s often not achievable from the starting position. This meant there needed to be a strategy on how to get the ball from the tee into the hole with the least amount of strokes. We had to look at our tools and work out the most efficient way of achieving our goal. It's important to remember each step towards your goal is as important as the goal itself.

Just like using a wood to hit the ball the furthest from the tee, then maybe a 5 or a 3 iron to get closer, and finally a putter to gently hit the ball in the hole, reaching your goal requires a thought-out strategy. Choosing which wood, iron or hybrid to use isn’t the same for each hole. It required a bespoke approach. It also required a discussion amongst team members about which tool was best to use (or at least a discussion amongst those who knew what they were talking about)! It took collaboration and agreement on what was the best approach to achieve the next step, much like in business when figuring out a strategy to achieve your goals. 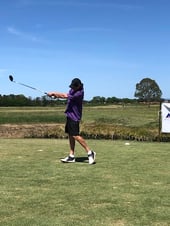 If I hit the ball on the first go, I was excited. If I missed the ball, I was frustrated. Yet no matter what, I knew I had to stay focused on the task at hand and always give it my best. Just because I had a good hit didn’t mean I could rest on my laurels. If I hit the ball first go, it proved to my team what I was capable of doing, and then I had to keep trying my best to continue improving and adding value to the team. Similarly, if I missed the ball or it was a bad shot, I lost confidence and wanted to give up but I knew I couldn’t. I had to dig deep, continue to focus and give it my best.

No matter how bad my shot was, someone from my team always encouraged me to keep going -  to keep trying. You can do it! Don’t worry. Try again. Focus. This is so important in a team environment. Consistent encouragement and motivation will encourage your team to bring out their very best.

About Bring a Mate

For those of you who are interested, here’s some more information about BAM - Bring a Mate. BAM is a great, proactive initiative that aims to help men speak about their mental health and what they’re going through before it's too late. The key message of the charity is if you’re going through a difficult time - you’re not alone - you have a mate. Or, if you’re ok, then support a mate.

On the day, there was a panel discussion where four men (ranging from corporate to tradie) were so open and vulnerable about their mental health challenges. I believe what they shared would be something the majority of men would go through in a life. Almost every man faces challenges in life - whether it’s relationships, financial hardship, addiction, loneliness, trauma and so on, and I really applaud these four brave men for sharing their challenges and how BAM has helped them. So please, lend an ear to your mates. Encourage them to share. Don’t judge. Ask questions. Be a mate.

A massive thank you to the Chamber for supporting men’s mental health, shedding light on the issues and encouraging men to share.

Business Success: A 7-Step Blueprint for Getting Your Marketing Right