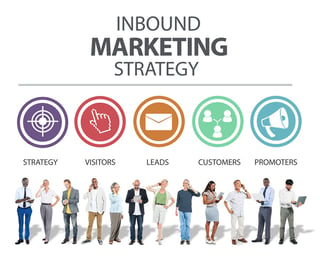 I remember the early days of Inbound Marketing, when it was a new philosophy that threatened to disrupt our very notion of marketing. Over the years evolution has continued, to the point where Inbound Marketing could become known as just ‘marketing’. Its growth has been phenomenal – but more remarkable yet is the diversity of businesses and organisations that are benefitting from the Inbound philosophy. B2B, B2C, government agencies and non-profits are all taking their organisations and marketing efforts to the next level with fundamental Inbound principles that anyone can employ.

In its 2015 State of Inbound report, HubSpot reported that:

So why exactly are so many diverse businesses and organisations adopting Inbound as their marketing philosophy of choice?

It generates leads, at a fraction of the cost

Sounds great right? It gets better.

On average, businesses save $20,000 each year by investing more in Inbound Marketing than outbound. Generating more leads while saving money? It sounds too good to be true. But the statistics don’t lie, and it’s a big reason why organisations of all types have moved to an Inbound Marketing approach.

Let’s take a moment to think about advertising. In the traditional model, once advertisements are booked and the creative is submitted, your message is static - vulnerable to sudden change and the whims of a distracted audience. And once the advertising stops, well so does your ability to reach your target market.

Yet Inbound Marketing allows your business to produce evergreen content, generating leads and conversions long after your content has been published.

A tweet can be sent in seconds. A Facebook post in a minute. A blog article in less than an hour. Inbound Marketing can be real-time, giving you greater control over your messages and allowinh you to respond to emerging issues, crisis, trends and even government announcements.

In 2009, mobile phone company Blackberry released a video on YouTube taking a not-so-subtle shot at rivals Apple. The advertisement was a hit, applauded for its boldness in taking on the software giant. Not to be deterred, Apple responded with a brilliant YouTube video of its own, firing right back. Needless to say, it went viral, earning Apple widespread praise for its gumption in tackling Blackberry head-on. But the most impressive part? Apple uploaded its video just hours after Blackberry. By the end of the day people had stopped asking ’have you seen Blackberry’s video’ and were instead wondering ‘have you seen Apple’s response?’. Mission accomplished. Watch the two battle it out here.

It aligns with the preferences of your consumers and audiences

People’s attitudes towards buying have changed. Research tells us that people are nearly 60% of the way through the buying process before they’re ready to speak to a sales person. According to Nielsen, 92% of consumers say they trust recommendations from friends and family above all other forms of advertising. And according to a study conducted by Search Engine Land, 72% of consumers trust online reviews as much as personal recommendations.

In a recent survey, 86% of consumers stated that using a search engine allowed them to learn something new or important that helped them increase their knowledge about a company or product (Pew Research Center).

It supercharges your SEO

Inbound Marketing is all about publishing content your audience is looking for. Frequent, helpful and high quality content is something that search engines love, helping to boost your search rankings. For example, a regular blog is a signal to Google, that your site is active which is a key factor in search rankings.

A new blog article, if connected to your website, will be indexed by Google and counted as a new web page. HubSpot research has shown that businesses with more than 400 pages of content generate six times the online leads compared with sites that only feature 50 - 100 pages. Whereas advertising is only useful for as long as you’re willing to pay for it, a well cultivated blog can continue generating leads years after it’s published.

It builds a community

The philosophy behind Inbound Marketing is about attracting your customers with valuable content they find useful - not buying them or interrupting them through advertising. It places the emphasis on the buyer and their needs, not the business and its sales targets. This philosophy means truly connecting with prospective buyers and understanding their motivations and pain points - and finding ways to solve them. The ROI isn’t always immediate, but over time it creates a community of ambassadors who are truly engaged with your brand. Regardless of your business type, size or industry, Inbound is a philosophy that has something to offer all of us.

How to Build a Successful Inbound Marketing Strategy

How to Easily and Effectively Measure Your Marketing Campaigns